In the “Last Frontier” of Medicine, as my Trekkie friends would say, scientists and physicians are exploring how the Microbiome and probiotics play a much larger and more vital role in our health. This role is larger than we could ever have imagined.

What is the Human Microbiome?

The human gastrointestinal tract (GI Tract) is home to more than 100 trillion bacteria per person. I have taught my medical and nursing students for years that our GI Tract is the seat of 70 to 80% of our immunity. In fact, studies now show that a newborn infant’s GI Tract, which is sterile and has no bacteria in it during the pregnancy, gets seeded with bacteria from the mother during vaginal birth. In fact, vaginal infants appear to be healthier than C-section infants. This jump-starts an infant’s immune system. This giant bacterial population, which outnumbers our human cells by a factor of 10, is called the “gut microbiota” or “gut microbiome.” For every gene in our genome, there are 100 bacterial ones. This is our “microbiome.” It has a huge impact on our health including our ability to digest food and our immunity and more. We, in turn, affect these bacteria too, from everything we eat and drink or even to the way we’re born. All of this can influence the species of bacteria that take up residence in our bodies! For every gene in your genome, there are 100 bacterial ones.

This is your “microbiome” and it has a huge impact on your health, your ability to digest food and more. We, in turn, affect them.

The dark tunnels of our intestines house more bacteria than any other part of your body, including those found on our skin. In fact, an international scientific team discovered that each of our bowels carries at least 160 different bacterial species. This means that our collective guts have just under 3.3 million bacterial genes, more than 150 times as many as reside in our own cell genomes. They also showed that the gut “microbiome” of a healthy person looks very different to that of someone with a bowel condition like Crohn’s disease or ulcerative colitis. In spite of the great diversity of bacterial inhabitants in our guts, researchers have shown that the GI bacteria of people from Europe, North American and Japan collapse into three enterotypes, or gut types. These three (3) clusters cut across age, gender, body weight and nationality – each producing energy in a slightly different way, manufacturing different vitamins (we do not make our vitamins) and possibly, affecting our susceptibility to different diseases.

Why is Our Microbiome Important?

Our “microbiome” is like a hidden organ – it helps us break down foods that our own cells cannot. And in turn, our food and drink affects our “microbiome.” Our first set of bacteria genes for digesting milk proteins, allowing us to make full use of our only source of nourishment as babies. Breast milk might even have evolved to nourish the most beneficial bacteria with special sugars no longer found in our diets in sufficient quantities to protect our health. Just before we move onto solid foods, our “microbiome” appears to start activating genes that help break down the complex sugars and starches in plants. This prepares us for the menu to come. As our diet diversifies, so do our bacteria. They activate genes that use carbohydrates effectively, produce vitamins, and break down unusual and diverse chemicals. As adults, our “microbiome” becomes relatively stable, but the types of bacteria found still depend on the food and water we eat and drink (remember most municipal water supplies have added chlorine to kill bacteria). The gut “microbiome” of people who eat high-fiber diets are different from those who eat high-fat diets.

So how does this affect why we can’t lose weight?

In 2006, a study was published in the peer-reviewed journal, Nature, by a group of doctors from Washington University Medical School that showed that “thin” mice and “obese” mice had different populations of gut bacteria (their microbiomes). They also proved that one particular strain of bacteria caused obesity rather than obesity changing the type of gut bacteria. If they introduced this strain of bacteria into mice who were bred in a sterile environment, these skinny mice became fat in 10 to 14 days. 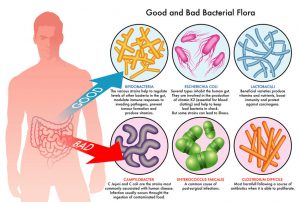 The strain of bacteria these researchers found is called Firmicutes. Mice aren’t the only species that carry this strain of bacteria. We do too! So those of us who have Firmicutes in our guts are more likely to be fat. This means that simple overeating may not be the fundamental reason a person is fat. Remember, leptin? We discussed it in an earlier lesson. The more weight a person carries, the less leptin they secrete and the hungrier they’ll be. Remember, leptin resistance is like the on-off switch for eating being broken. So the big question we should ask is that “if we change the composition of our gut bacteria, will we lose weight?” Medical doctors like to do research on human identical twins because the genetics and sexes are the same. So a colleague of the doctors in the first study used identical female human twins, one who was obese and one who was thin. She took bacteria from the both of the twins and in mice who grew up in a sterile environment, those who received the fecal transplant from the fat twin got fat while those who were thin stayed thin. So since the bacteria were from humans, it makes sense to extrapolate that this is the same mechanism as in humans. Perhaps the “fat” bacteria can metabolize more complex carbohydrates than the “thin” bacteria causing one to gain weight? And lastly, a third study from Catholic University in Belgium looked at obese mice fed a high-fat diet that were fed a p
rebiotic (a fiber nutrient that certain strains of bacteria like to eat). It found that a certain bacteria, Akkermansia muciniphila, increased markedly. These mice also lost one-half of their body fat without any change in their diets. They also lost their insulin-resistance. So you see, the control of appetite, maintenance of ideal weight and health of our gut bacteria is a very complex relationship.

So what does all this mean for me?

Research has also shown that when mice are fed a high-fat diet to make them fat, they develop a condition called “leaky gut syndrome“. What this means is that when the gut becomes leaky, bits of bacteria, food, feces or other stuff that is normally kept inside our gut can sneak into our circulation. When bits of bacterial cell membranes leak into our circulation, our immune system mounts an attack against these (inflammation) and autoimmune diseases (our immune system attacking our own cells) can develop. Inflammation, insulin resistance, metabolic syndrome and Type 2 Diabetes mellitus may be a result of, in part, the result of a leaky gut.

So what would you recommend?

There are hundreds of probiotics out there. Choose one that has as many strains of bacteria as possible. It doesn’t matter how many cfu’s (colony formation units) there are as this just tells you how many were in the package when it was shipped, not how many are there when you buy it. Make sure there are also prebiotics like fructo-oligosaccharides (FOS) in it so the good protective bacteria can grow.